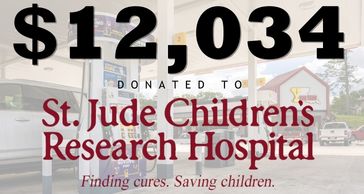 We're proud to announce a collective donation of $12,034.88 to St. Jude's from our Shell "Giving Pump" fundraiser!

ST. ROMAIN OIL is proud to announce a collective donation of $12,034.88 to St. Jude's Children's Research Hospital as part of the Shell “The Giving Pump” initiative at stations across Central Louisiana. Shell launched “The Giving Pump” as part of its Force For Good initiative to drive positive change in local communities by giving back.

During the months of August & September, a portion of the purchases made by consumers who used the designated pump at the St. Romain Oil network of Shell stations supported the children's charity, St. Jude's. “The Giving Pump” at the station was specially marked with colorful signage to inspire consumers to fuel up and support this local charity.

More than 3,000 Shell stations across the U.S. participated in this two-month Giving Pump initiative, benefitting more than 400 children’s charities.

"St. Jude was an easy choice for our Giving Pump recipient charity, as we personally know several children from CenLA who have received life-saving treatments there. St. Jude has always gone above and beyond for their families, and we are proud to help support that mission," accounts Nick St. Romain, 3rd generation Co-owner and CBDO of St. Romain Oil.

Details of the participating wholesaler include:

Giving Back has never been easier!

We're donating a portion of proceeds from EVERY fuel purchase made at the #GivingPump August 1through September 30, 2021! And the best part is… you pay the same price & we make the donation! Just look for the purple Giving Pump at all Y-Not Stop locations and other locally owned Shell locations in our network throughout Central Louisiana!

Subscribe to our newsletter to receive Y-Not updates and exclusive deals!

Thank you for your information.
We will get back to you soon.